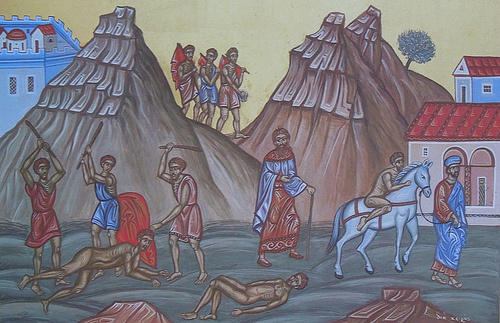 Attitude is a settled way of thinking or feeling about someone or something.

Read the Parable of  The Good Samaritan

A simple act of Kindness can make a tremendous impact in someone’s life. Reading the Parable of the good Samaritan, I realized that Jesus was teaching about attitude towards the distressed people, within one’s sphere of influence.  All the characters in this parable, were on the same road at one time or the other, between Jerusalem and Jericho. The parable describes the different attitude of the three characters toward the one in distress.

Character 1 – The Stranger. This was a person with a purpose, on a journey. He had his possession on him and hoped to have a successful trip.

Character 2 – The Thieves. The attitude is that of “What is yours, is mine. I am going to take it by force“. This way of thinking is very destructive. Reading the parable, the thieves laid ambush for the stranger, robbed him of his possessions, beat him up and left him half dead. Indeed the attitude of a thief is basically, “I am willing to kill, steal and destroy to get what does not belong to me and I don’t care what happens to you”. A thief would also use, abuse, and dump, with little or no feeling.

Character 3 – The Priest and Levites. The attitude is that of “What is yours is yours, what is mine, is mine. We can’t mix”. This way of thinking is of selfishness, (me, myself and I). The priest and Levites had this thinking of self-righteousness. They saw themselves as better than the distressed stranger and  they were probably thinking “what would happen to me if I helped?” Their reputation was more important to them, they were filled with pride and did nothing to help.

Character 4 – The ‘Good’ Samaritan. The attitude is that of “What is mine, is yours. You can have it“. The way of thin

king is that of Selflessness. This man saw a  stranger in distress, on the same road he was travelling. He must have thought “This could have been me

. What would happen to this stranger if I do not help?”. He gave first aid, took the stranger to where he was better catered for and he took care of the bills.

For God sent not his Son into the world to condemn the world; but that the world through him might be saved.
(Joh 3:17 KJV)

My Thoughts: While the thieves took away from the man, the Samaritan gave to him, the Priest and Levites did nothing. What is your attitude towards the person in distress, within the sphere of your influence? Selfishness, Self righteousness or Selflessness? The selfish and self-righteous are not kind people. The are only thinking about themselves. The selfless, are kind people. They are always thinking “how can i help others?” Selfish and self-righteous people are consumers hence deplete or hoard resources and are never satisfied. Selfless people are producers, hence supply to the needs to others and lack nothing.

As the Son of God was not sent to condemn rather save, (the people of) the world, consider yourself likewise, sent to save, and not condemn, those in distress within the sphere of your influence. Realign your attitude with kindness.